At the far end of Austria, right on the Czech border is one of the most special places on earth. As under a magnifying glass the moral challenges of our civilization are meeting here: guilt, responsibility and redemption. 40 chimpanzees are living in an overgrown former safari park, hermetically sealed off from the rest of the world. They are the survivors of the former laboratory of Immuno, a pharmaceutical company. Infected with HIV and hepatitis viruses. Traumatized, confused, and highly aggressive. They hate men and have every reason to do so. With them are four nurses. Some of them were their former care takers at the labs.

More than 20 years ago, at the age of 17, Renate and Annemarie began their training as animal nurses. Both of them grew up on Austrian farms and this was their dream job.

But then events took a different turn. Their internship took them to the animal laboratories of the pharmaceutical company Immuno in Vienna. 40 chimpanzees, kept individually in small wire cages were used as experimental animals for the development of HIV, hepatitis and influenza vaccines. For the animals this was daily torture. Anesthetized, infected with viruses, and always isolated. No movement, no contact with other monkeys. "Either you run and try to forget or you're stuck forever", says Annemarie today. Back then the two prospective animal nurses decide to stay hoping to provide the apes with a minimum of interaction. At the same time a political thriller emerged concerning experimental chimpanzee. In 1973, the conservation agreement was ratified in Washington. Austria's accession would make the further import of wild animals impossible. Was it consideration for the interests of the largest pharmaceutical company in the country that Austria delayed the accession for almost 10 years and finally joined in 1986 as 74th country?
Doch nichts ist unmöglich:
But even four years after accession an illegal delivery of 20 chimpanzee babies from the animal dealer Dr. Sitter arrived directly from Sierra Leone. And this is only the starting point of a political thriller which should accompany the fate of the chimpanzees.

In 1997 the U.S. pharmaceutical company Baxter took over Immuno, and thus inherited a huge problem. They did not  want to perform any more tests on chimpanzees, but what to do with this toxic legacy of our civilization? Traumatized monkeys, some infected with HIV and lethal influenza viruses, cannot easily be disposed of. Finally the solution. Baxter set up a safari park for tortured animals near Vienna.

Renate and Annemarie and other keepers and experts now took care of the traumatized animals. The task of the crew was to introduce the mentally and physically tortured animals to a life where they can socialize in small groups. Then, in 2005 disaster strikes. The arduously initiated rehabilitation program seems to come to an end. The safari park company is bankrupt. The chimpanzees become  bankruptcy estate and with them the nurses and experts. Many have to leave the project. Month by month, the remaining team works in uncertainty on the deserted safari park. Finally, after years of struggle, the animal protection company "Aiderbichl" takes over the compound in 2010.

The survival of the chimps is secured. Socialization remains a tedious process accompanied by dramatic setbacks and heart-warming success. The first finger tip can result in tender embracement or end fatally. At the beginning of 2012 the care takers’ dream comes true: After elaborate construction work 4 meter high, electrified concrete walls frame a compound. What looks like a prison from outside means a lot to the chimps.

For the first time since their imprisonment they will be able to see the sky above, feel wind, rain and sun and actually walk on grass. But are they still capable of accepting such a new world?

For Annemarie and Renate it’s a huge step in freeing themselves from the entanglement with the apes’ fate. For after all they are prisoners too – on the other side of the fence. 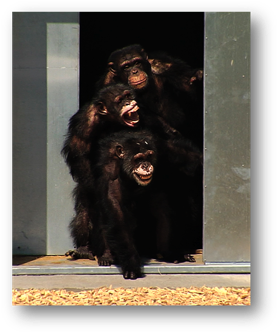 "The chimpanzees show us what it means to be human," says Jane Goodall